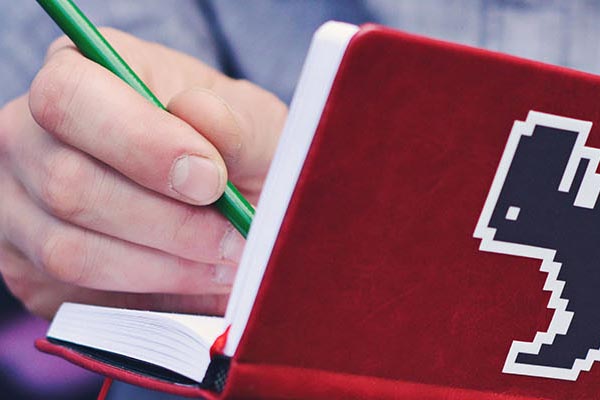 About 25 years ago, I sat across from Larry, a graphic designer. He sketched a pair of salt and pepper shakers in his sketchbook as we talked. He told me he used the book to write down cool ideas, draw sketches, and glue in samples of things he liked. And it got me going.

Although I was a writer at the time, I had a strong leaning toward the visual. Soon after hanging out with Larry, I got my own sketchbook and started capturing ideas, designs, and things I thought were cool. I’d glue things into the book. I’d draw what I saw. And I wrote down ideas that I’d like to do some day. I called it my Creativity Book.

I hate to lose ideas. Carrying a Creativity Book on a regular basis has helped me capture and ruminate on ideas for more than two decades.

Sometimes, it meant writing things on scraps of paper and transferring them to my Creativity Book later, or it meant cutting pictures out of magazines. In my Creativity Books, I’m planting seeds that may someday come to fruition. It helps me go over ideas again and again.

I use an empty journal (without lines) or a sketchbook that looks like a regular book, and I carry it with me whenever I can. I normally don’t write things in it that are too personal, in case it ends up in the hands of someone else, like my friend, Judy.

Judy was always fascinated with my Creativity Book. Sometimes, she would come into my office and start looking through it (most of the time with my permission). She once gave a talk on creativity and asked if she could bring my books in as an example. I didn’t find any harm in this until she started passing them around. I had to take a mental inventory to see if there was anything overly personal in the books. I didn’t think so.

I’d like to encourage you to start a Creativity Book. My first rule for what to put in it is that there aren’t any rules, but here are some ideas of what you could include in your Creativity Book:

There was a church across the alley from me when I was growing up in Wilmette, Ill. My brother and I would go over to visit the secretary, and she would take out a bunch of paper, colored pencils, pens, rulers, and protractors for us. We would spend hours drawing pictures, mostly cool cars or plain doodles.

This is a time for randomness and childlikeness. There is nothing I try to accomplish when I doodle. I explore shapes and shades and colors. Feel free to draw what you want without thinking too much about what you’re creating.

These are inspirational and/or thought-provoking quotes. You could even use bumper stickers or quotes from TV shows. One of my favorites is a sign by the front door of the nursing home of Homer’s father on The Simpsons. It says, “Thank you for not discussing the outside world.”

For a couple of years, I was pasting in my favorite cartoons from my daily Far Side cartoon and Jack Handey’s “Deep Thoughts”. I kept the funniest ones to inspire and amuse myself.

I also draw my own cartoons. When we lived in Orlando, each year, the Orlando Sentinel had an editorial cartoon contest. For several years, I submitted cartoons and had one of my cartoons printed five different years.

Because I was a writer by trade for a decade, I was always thinking of topics for freelance jobs or ones I thought would be relevant to my work, either for publications or a blog post.

I write out as much as I can so when I do take the time to write the essay, I’ll have something to work from. I don’t necessarily use every idea I write down but it’s a good start.

I like to write out ideas, examples, anecdotes, quotes, statistics, and the general outline of an article or blog post.

One of the main ways to brainstorm is doing something called Mind Mapping. I do this a ton. This involves writing the main topic in the middle of the page and then writing out topics and items related to it, attaching them to the central idea by lines so it looks like a web.

I also like to brainstorm names. I start by doing a free association with certain words to come up with long lists. I like to give myself a time limit of 5 or 10 minutes per word that I’m free-associating. I then highlight the words I think are the most appropriate and then combine them in ways that are memorable. And then I might modify them by combining the words or doing an acronym. I once won $50 at work when renaming a division of our company.

I make smaller sketches of what could be designed. This way, I can come up with a bunch of different designs without committing a bunch of design time. I’ve done this especially with the design of cards or announcements. I’m able to put down the basic design of the piece on paper, on a smaller scale, without having to waste a lot of time designing and redesigning something. I usually have the text written down on the computer.

The Creativity Book is a perfect place to do this. It allows me to revisit the designs I didn’t use and to think about why I didn’t use them.

I use this to remember people and events. One business card I have glued into one of my Creativity Books is a guy from Hong Kong I met on an airplane. He and his buddy were having a disagreement and they asked me to be the arbitrator. The big question was whether or not the American phrase, “You can say that again,” was a curse.

It’s not only the information that I was to capture, but also if I find the design of the card interesting or inspiring. I also like to keep the business card if it brings back good memories, like a restaurant or museum.

This is a list of ideas of what I want to do during my life and with my life. I’ve done this in a list or I’ve just written down things like, “I’d like to go on a cruise of the Greek islands someday.”

I write down book titles, movies, and TV shows suggested by people I respect. Or they could be titles I read about in an article. This goes for websites I’d like to look at later.

Diagrams of Things I Want to Build

I took a woodworking class a while back and came up with several designs of things I’d like to build. Whether they were tables, chairs, desks, or fun little boxes, I started to put things down on paper that I’d like to create someday.

I dream about things I’d like to have around me that have my fingerprint on them. Sometimes, they are just mundane things with a twist or a way to repurpose an old piece of furniture.

I’ll cut out pictures from a magazine and paste them into my Creativity Book. I’ll use rubber cement or spray mount so they stay there. I’ve found that glue sticks normally don’t work that well.

The pictures can be interior design, logos, nature, products, furniture, and more. I’ll put anything that is beautiful and inspiring. I recently looked at one of my old Creativity Books and it had several pages of pictures of Frank Lloyd Wright homes and furniture.

I like to keep lists of people who can help me on certain projects or from whom I can get information from. For example, if I’m working on a project, I sometimes come up with a list of people who have experience in this area or who can point me to people with answers.

Several years ago, I was working on an article about documenting creativity. I put together a list of people I know who were very creative. I sent them all an email and asked for a response. And I was happy I did. I still look at some of those notes and am amazed at the variety of ways they document things.

I don’t remember conversations very well, so it’s helpful to document them with notes. It can be a bit funny to be out for coffee with a friend and to be writing things down, but it helps me to remember the major issues going on with them. I’ll do this both in person or if I’m on the phone.

This is like a travelogue. I’ll write what I did each day, draw out sketches of buildings or scenery, and talk about the people I was with and also met along the way. This helps me relive the memories—both good and bad. It is fodder for future stories or a gauge of where I’ve been and done. I think, Oh, yeah, I remember doing that.

My first experience with a Creativity Book was at the J. Paul Getty Art Museum in Malibu, Calif. Being there, and then looking back on the experience, helps me to appreciate other peoples’ creativity and expertise. As a bonus, I think I saw Keanu Reeves but can’t be sure.

One of my favorite books is Making Ideas Happen: Overcoming the Obstacles Between Vision and Reality by Scott Belsky. The book basically says that it’s good to generate ideas but you really need to home in on the good ideas and put them into action.

This would be my desire for you. I encourage you to get a sketchbook to put your ideas down on paper. And then put them into action.

As I’ve kept a Creativity Book I’ve learned that there are some things you should and shouldn’t do. Let me explain.

Here are the things you shouldn’t do:

Here are some things you should do:

I had coffee with my friend, Johnny, recently and he was intrigued by my Creativity Book after I told him how I used it. I got a note from him a day later saying that he’d gone to Barnes & Noble afterward and got his own Creativity Book.

I can’t wait to see what Johnny will accomplish with the ideas that he’s harvesting and putting into action. Go, Johnny, go.